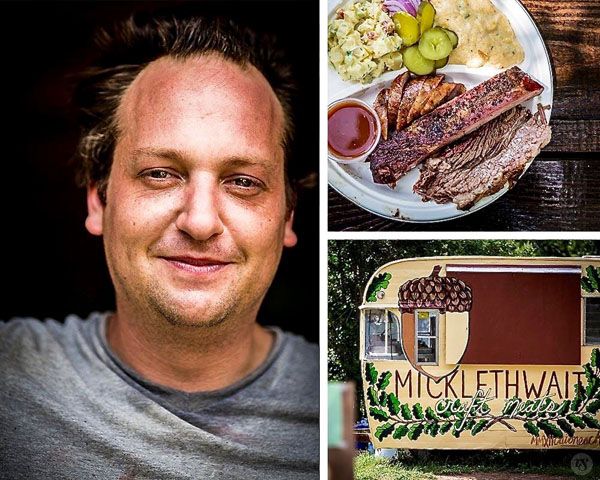 Tom Micklethwait is the owner and pitmaster of Micklethwait Craft Meats. Tom turned to barbecue after a career in baking and he found that the two had a common thread: manipulating primitive elements for different end results. While working at beloved Austin restaurant Vespaio, Tom began experimenting with his own smoked meats and hosting backyard barbecue parties — perfecting his signature recipes. Not long after, he set his sights on opening his own BBQ joint. In Tom’s true DIY fashion, he found and salvaged a vintage Comet trailer, transforming it into a full-service food truck offering up a completely made-from-scratch menu. Tom served his first barbecue plate out of the window of that trailer in December 2012. Fast-forward to 2019 and the Micklethwait name is synonymous with some of the best barbecue in Texas.

Ren Garcia - For more than 20 years, Ren Garcia has worked in the kitchens of Austin’s most beloved restaurants. Ren cut his teeth cooking at the original Kerbey Lane location and, from there, worked his way up the ranks from cooking at iconic vegetarian restaurant Bouldin Creek Cafe to sous chef, then kitchen manager for esteemed Italian restaurants Vespaio and Enoteca. Ren then went on to help open farm-to-table restaurant and butcher shop Dai Due, named in 2015 as one of the country’s Best New Restaurants by Bon Appétit. Ren’s vast industry expertise, outstanding culinary chops and steadfast work ethic are invaluable to the Micklethwait team.